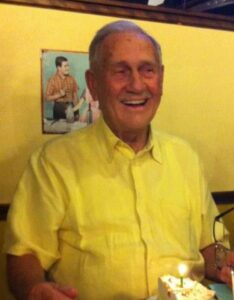 Lorne McMillan was born July 20, 1930 to George Robert and Ethel Pearl Gill McMillan in Kellwood, Manitoba Canada.  As the fifth child out of six, Lorne spent his formative years developing a strong work ethic the old-fashioned way - on the family farm.
Mr. McMillan married Merle Gamble in 1952 and attended the University in Winnipeg, Manitoba where he graduated in 1956 with a degree in education. Lorne maintained a sheep farm east of Kellwood in Manitoba Canada and worked as a teacher for a brief period in the 50s. He realized he needed something more challenging and decided to change careers. Nothing is more challenging than a house moving business since he was an out of the box kind of guy and simply loved hard work. His family and new business relocated to Brandon Manitoba where he raised his children and operated BRANDON BUILDING MOVERS & SONS.

In 1969, Lorne packed up his wife and seven children to drive south until he no longer saw snow. Dallas, Texas became Lorne’s new home and a great location to operate MCMILLAN MOVERS without the constraint of snow and below freezing temperatures. Shortly after moving to Texas, the family quickly grew to a total of nine kids.

Since 1970, MCMILLAN MOVERS provided affordable housing to north central Texas with a focus in Dallas County and Ellis County. Lorne is responsible for rescuing several historical structures from a bulldozer by relocating them throughout the metroplex to be restored to their old charm.  Lorne started the Dallas House Movers Association which grew to what is known today as the Texas Association of Structural Movers. He is also responsible for writing a monthly newsletter for the Dallas House Movers Association which later evolved into the Texas Association of Structural Movers’ monthly magazine. A life-time charter member of the TASM, Lorne’s house moving legacy continues today through his two sons and grandsons for a total of three generations of house movers.

Known for never sitting still, Lorne once again decided to change careers at an age when most people choose to retire. In 1986, he bought a home and acreage in Waxahachie, TX to settle down with his new wife, Pat Birmingham. He began buying and selling pot-belly pigs and his small business quickly grew to what it is today, HiView Farms.

Lorne worked hard every day of his life and never experienced retirement. He enjoyed 34 years of breeding and showing pot-belly pigs, camels, alpacas, miniature donkeys, miniature horses, zebras, kangaroos, exotic sheep, fallow deer, lemurs, pigmy goats, peacocks, cockatoos, corgis, and munchkin cats. His most joyful time each year was dressing up like a wise man at Christmas and parading his camels in churches throughout the state for live nativity scenes.

You can still show your support by sending flowers directly to the family, or by planting a memorial tree in the memory of Lorne Wray McMillan